Your Constitutional Rights During a Police Stop 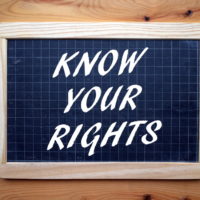 If you’ve been a motorcycle rider in California for any length of time, you know that riders receive far more attention from law enforcement officers than do drivers of passenger vehicles. Even safe and conscientious riders often find themselves in prolonged and seemingly-baseless traffic stops. This is an especially great problem for riders who ride while wearing their three-piece club patches, due to the widespread biases and misconceptions among law enforcement regarding members of motorcycle clubs. Riders don’t deserve to be subjected to discrimination based solely on exercising their Constitutional rights or on their status as a rider, and new Supreme Court case law may support riders in taking legal action when such discrimination occurs.

In a recent post, I mentioned the U.S. Supreme Court case ofRodriguez v. US, but would like to discuss in greater depth the legal protections which exist for riders both in California and across the country. The events on which the Rodriguez case is based followed from a simple traffic stop. The driver, Dennys Rodriguez, had briefly veered onto the shoulder of the highway when a police officer pulled him over. Rodriguez pulled over and complied with the officer’s subsequent requests, and he received a written warning from the officer. Despite having, in the opinion of the Supreme Court, no basis for doing so, the officer asked if he could walk his drug-sniffing dog around Rodriguez’s vehicle. Rodriguez said no. The officer then called for backup, again without basis for his suspicion. A backup officer arrived eight minutes later. After two different trips around the vehicle, the dog detected the presence of drugs, and the officers arrested Rodriguez.

Rodriguez was convicted for charges stemming from the discovery of methamphetamine in his car that day. However, the Supreme Court overturned the man’s conviction, finding that the police officers had detained and searched Rodriguez without reasonable suspicion. The US Constitution’s Fourth Amendment protects citizens against “unreasonable searches and seizures.” This amendment protects you from warrantless searches of your home or personal property, and makes it illegal for officers to deprive you of your liberty by physically detaining you without reasonable suspicion or probable cause. The Rodriguez opinion specifically looked at how long a stop may last before it becomes an unreasonable search and seizure. Since the only legal, reasonable basis for the stop was to issue Rodriguez a warning to remain in his lane of traffic, the Court ruled that, once the officer had completed the process of issuing a written warning, any additional detention by the officer was unreasonable and unconstitutional.

How does this case apply to California riders? This case offers strong support for an argument in court that an officer’s detention of you to grill you about your patches, jacket, or any other perfectly-legal club insignia once they have issued any traffic citations or warnings, is unconstitutional. The best way to prove that a detention or search was unlawful is to provide video evidence of your interaction with the officer, showing any extended and baseless questioning after the reason for the stop is complete. For the sake of your personal safety and your legal and constitutional rights, using a camera while you ride is strongly recommended.

If you believe your constitutional rights may have been violated in California, or if you have been the victim of a Bay Area motorcycle accident, contact the experienced and aggressive San Francisco motorcycle rights and biker injury lawyer William Weiss for a consultation at 415-362-6765 or williamweiss@gmail.com.