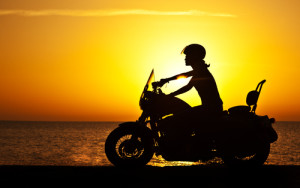 The state of Texas recently enacted a law amending the state’s policies on the use of LED lighting on motorcycles. LED lights are used by a number of motorcyclists to personalize their bikes, but some believe that adding light strips can help with safe riding as well, especially at night. SB 1918 in Texas now authorizes motorcyclists to use LED ground-effect lighting on their bikes to illuminate either the body of the motorcycle or the ground below the motorcycle, so long as the ground lighting emits a non-flashing amber or white light. This law is relatively straightforward when compared to the confusing set of laws governing LED lighting on bikes in California.

The Texas law was sponsored by a Texas State Senator who was concerned about riding his Harley-Davidson after dark in Texas due to the lower visibility of his bike. Sen. Kirk Watson of Austin, Texas, an avid biker who rode to the most recent Sturgis Motorcycle Rally, had heard about LED lighting from a constituent who used the lights on the motorcycles he and his wife rode in order to help other drivers see them at night. The constituent and his wife both used the LED strips on their bikes but found that they were regularly pulled over by police who were not necessarily clear on the legality of the lighting. To clear up the apparent ambiguity in the law, Sen. Watson introduced SB 1918 along with another motorcycle enthusiast, Rep. Joe Pickett of El Paso, in order to prevent more bikers from being pulled over for using the lighting.

California law on the ability of motorcyclists to use LED lighting is a bit more complicated than Texas law. Unlike the new law in Texas, the laws in California do not apply to motorcycles specifically but rather apply to vehicles in general. Furthermore, the laws distinguish between lights that emit less than 0.05 candela per square inch of area and lights that emit more. Under California Vehicle Code (“CVC”) 25400, lights that emit a diffused, non-glaring light of less than 0.05 candela per square inch may be used on vehicles, subject to two conditions: 1) if the lights are on the front of the motorcycle, they may not be colored red, but may be other colors, and 2) such lights may not resemble nor be installed within 12 inches of or in such position as to interfere with the visibility or effectiveness of any required lamp, reflector, or other device on the motorcycle. For lights emitting more than 0.05 candela per square inch, CVC 25950 applies. That section states that lights must be white or yellow, although rear side stop lamps should emit red (unless manufactured prior to 1979, in which case they may show yellows) and rear turn signals may emit yellow.