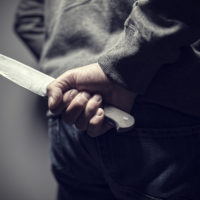 In our last post, we discussed California’s laws on carrying knives, including a look at laws specific to the City and County of Los Angeles. The City of San Francisco takes these laws even further. Under SF Police Code Article 17, § 1291(a), the city designates all of the following as “dangerous weapons”:

Note that at the state level, a switchblade under 2″ is legal. In SF, possession of “any spring-blade, switch-blade, snap-blade knife, or other similar type knife, or any knife any blade of which is automatically released by a spring mechanism or other mechanical device” is illegal, with a mandatory minimum of 30 days in the clink. See 17 SFPC § 1292.

Under 17 SFPC § 1291(b), if you carry any “dangerous weapon” (defined above) concealed on your person, it is a crime to “loaf or loiter upon any public street, sidewalk, or alley, or to wander about from place to place, with no lawful business thereby to perform, or to hide, lurk, loiter upon or about the premises of another.” A lot of people might see this as overbroad, as in, the police could stop you at any time you were not actively on a job, on your property or on another’s property as a guest. The courts, however, have found (1) that San Francisco (and other cities) can supplement the less restrictive state laws, and (2) that this restriction is not overbroad, since it’s touching on a defined weapon. See Yuen v. Municipal Court (1975). And if you’re carrying a concealed “dangerous weapon” on your person, you can’t legally be in any place in the City of San Francisco where intoxicating liquors are sold, or any other place of public resort (for instance, a farmer’s market, flea market, street fair), even if you’re a paying customer. See 17 SFPC § 1291(d).

There’s an exception to all of these for “ordinary tools or equipment carried in good faith for uses of honest work, trade or business or for the purpose of legitimate recreation,” and this will usually cover your folded pocket knife, assuming you can explain why you need it. See 17 SFPC § 1291(e).

Additionally, under San Francisco Park Code § 4.01, carrying “dirk” knives, “bowie” knives or other fixed blade knives in a park is considered to be disorderly conduct, it doesn’t matter if it’s openly carried legally under state law, it’s still not allowed in a park. That’s another way that SF’s laws are stricter than the state laws.

The same goes for Port lands: under SF Port Code § 3.1, carrying “dirk” knives, “bowie” knives or other fixed blade knives on Port lands is considered to be disorderly conduct. Again, it makes no provision for if it’s openly carried legally under state law. You have to watch out here, because a lot of SF is Port land.