Combat Motorcycle Profiling on the Federal and State Level 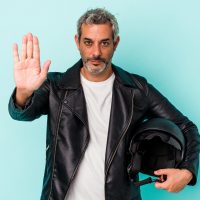 The American Motorcycle Association describes motorcycle profiling as discriminatory law enforcement actions which target motorcycle riders. Despite motorcyclists representing a wide range of people from all walks of life including doctors, educators, and other professionals, motorcyclists are often unfairly targeted in ways other motorists are not.

Motorcyclists are discriminated against in a variety of ways including law enforcement agencies profiling them based on the clothing they are wearing which promotes organizations or clubs they are affiliated with. In California it is illegal to conduct motorcycle-only checkpoints. California Vehicle Code § 2814.1 (d).

A 2021 National Motorcycle Profiling Survey detailed that 99% of over 34,000 survey participants share that they have been targeted by law enforcement based on their appearance alone.

Research substantiating claims of motorcycle profiling has led to increased awareness of the discrimination and even legislative action to combat it. The National Motorcycle Profiling Survey helped to largely lay the groundwork for the Motorcycle Profiling Resolution to be passed unanimously in the U.S. Senate and House of Representatives.

How to Combat Motorcycle Profiling at the Federal Level

There is no federal law that makes motorcycle profiling illegal. However, steps have been taken toward bringing awareness to this common occurrence. On December 11th, 2018, the U.S. Senate unanimously passed the Motorcycle Profiling Resolution. This resolution was aimed at creating more awareness about motorcycle profiling. The aim of this resolution is to have increased cooperation between law enforcement and motorcyclists in order to ultimately eliminate these discriminatory practices.

Section 1983 of the Civil Rights Act
While there is no explicit law against motorcycle profiling at the federal level, there are still ways victims can combat this practice using federal laws. For example, under Section 1983 of the Civil Rights Act, motorcyclists may have the grounds to sue state government officials and employees who violate their constitutional protection from being subject to questioning based solely on their appearance. Under Section 1983, motorcyclists may also be able to collect compensatory damages and attorney’s fees. There may also be additional constitutional violations stemming from motorcycle profiling but this is a developing area of law and it is uncertain how this will develop.

Protections Under the First Amendment
Motorcyclists may also be able to combat motorcycle profiling by way of the First Amendment. There is a range of motorcyclist groups, clubs, and organizations and if you belong to such a collective, you have the right to display your affiliations without worrying about being targeted by law enforcement.

Every situation is unique, and every motorcyclist will experience a specific set of circumstances that may or may not be a violation of federal law. An experienced attorney on your side can help you understand your rights and navigate your circumstances to secure the compensation you’re entitled to.

How to Combat Motorcycle Profiling at the State Level

At the state level, you may have an easier time combatting motorcycle profiling, but it largely depends on the state.

Several states have continued to join in on passing legislation that combats motorcycle profiling. More recently, Idaho became the fourth state to pass a motorcycle profiling law in 2020. The measure addresses the discriminatory practice and allows victims to have more options when pursuing a claim.

Louisiana also passed a similar law in 2019 while Maryland and Washington state were the first two states to address motorcycle profiling in 2016 and 2011 respectively.

While these states recognize and address this discriminatory practice, they, unfortunately, do not provide monetary compensation for motorcyclists who have been victims of such profiling. The Federal Civil Rights Act remains to be the main recourse motorcyclists have in order to seek monetary relief.

While these four states have addressed motorcycle profiling with legislation, many other states have taken the necessary steps to help eliminate the main factors that contribute to this discriminatory practice. States including Alaska, Missouri, North Carolina, Virginia, Illinois, New Hampshire, Iowa, Michigan, Minnesota, Oregon, Rhode Island, Texas, Washington, Wisconsin, and Wyoming have all restricted checkpoints for motorcyclists. California has also followed suit by outlawing checkpoints specific to motorcyclists.

Have an Experienced Attorney on Your Side

Having an experienced attorney on your side can help you navigate your rights and options. If you have had your rights as a motorcycle rider infringed in San Francisco, contact William E. Weiss for a free consultation at 415-362-6765 ext. 157 or preferably my cell at 415-235-7060. You can email me at william.weiss@gmail.com.