What Do I Do If a Roadway Defect Caused My Motorcycle Accident? 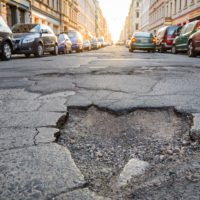 Seasoned bikers know that a road pockmarked with potholes, covered in loose gravel, or marked with deep fissures and cracks can cause even experienced motorcycle riders to crash. If you’re injured in a motorcycle accident due to a defective or negligently-maintained roadway, you may be able to pursue a claim against the responsible government body for your accident. Speak to an experienced California motorcycle accident attorney as soon as possible after a crash to ensure your claim is preserved.

Who is responsible for defective roadways?

Depending on the location of your accident, a number of different government bodies might be responsible for an accident caused by a defective roadway. If you were riding on the federal highway system, then the federal government may be liable, as well as any independent government contractors hired to handle the design or construction of that section of road. If you were on a state or local road, then CalTrans or the local municipality may bear responsibility for the construction and maintenance of a roadway. Roadway defects can be as simple as a large pothole causing you to lose control of your bike, or debris from recent road maintenance that wasn’t properly removed. A defect can also be more complex, such as a defect in the design and engineering of a roadway.

Traditionally, a concept called “sovereign immunity” barred citizens from filing a lawsuit against a governmental body. However, exceptions exist to this immunity where a government entity has acted especially badly. If your attorney can show that the responsible body knew about the serious defect in the road and, despite having abundant time to do so, failed to take any action to remedy the harm, then you may still be able to file a claim for damages against that entity.

What to do immediately after a crash

Once you’re safe and out of the roadway, call the police to report the accident and have a police report made. Make sure that the officer sees the defect in the road, so that it can be included in the report. Take photos of the defective condition from several angles.

If anyone lives near the site of your accident, try to speak to them and ask if accidents happen frequently around that location, and, if so, if they have an opinion as to why that’s happening. If there are frequent accidents in that spot, that also tells you that the responsible government entity has likely received notice that the area is dangerous, but has failed to take any action to fix the dangerous condition.

Finally, it is important to know that the time limits on filing a claim against a government entity can be much more restrictive than those for a normal lawsuit. In addition, there are often more procedural steps to take and administrative remedies that plaintiffs must exhaust before such a claim can be pursued. Consult with a lawyer as soon as possible to ensure that important deadlines don’t pass you by.

If you’ve been hurt in a Bay Area motorcycle accident, contact experienced and aggressive motorcycle law attorney William Weiss for a consultation on your claims, at 415-362-6765.

By William E. Weiss | Posted on January 29, 2016
Skip footer and go back to main navigation