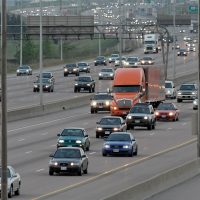 California Vehicle Code (CVC) 22107 is the Vehicle Code section pertaining to lane changes. Many traffic accidents occur because a driver changes lanes erratically without checking for nearby vehicles, without signaling, or otherwise negligently. Although the bar set by CVC 22107 is low, it’s one of the most common traffic tickets issued in California. Continue reading to learn about California’s unsafe lane change law, including how it applies to motorcyclists and lane splitting. If you’ve been hurt in a traffic accident in the Bay Area, call celebrated San Francisco motorcycle accident attorney William E. Weiss.

CVC 22107 dictates that drivers of all vehicles must turn or change lanes only when it is safe to do so, and only after signaling appropriately. The section reads:

No person shall turn a vehicle from a direct course or move right or left upon a roadway until such movement can be made with reasonable safety and then only after the giving of an appropriate signal in the manner provided in this chapter in the event any other vehicle may be affected by the movement.

Following CVC 22107 means doing what any safe driver would: Before turning or changing lanes, check your mirrors and your blind spot, signal, and then make the move. Changing lanes when it’s unsafe to do so–such as if there’s already a vehicle in the other lane or that will soon be in that spot based on their speed of travel–is unsafe and can lead to a moving violation or a wreck.

Many drivers change lanes without signaling or checking in violation of CVC 22107. CVC 22107 violations are among the most commonly issued traffic tickets. Violating CVC 22107 can result in a fine of $238 and one DMV point on the driver’s record, as well as higher auto insurance rates.

Who’s at Fault After a Lane Change Accident?

Like other traffic safety rules, CVC 22107 is aimed at preventing accidents. If a driver violates CVC 22107 and changes lanes without checking, without signaling, or when there’s another vehicle already occupying the space, that driver is acting negligently and may be at fault for any resulting accident. Violation of CVC 22107 is strong evidence of negligence should a crash result.

Of course, the vehicle changing lanes is not always responsible for a resulting car crash. If a driver approaches from behind and ignores the other car’s turn signal by, for example, intentionally speeding up to try and prevent the lane change, that driver may be liable should an accident occur. Liability after any accident depends upon the behavior of all parties, including whether and how each driver acted reasonably or negligently under the circumstances.

Is Lane Splitting Illegal Under CVC 22107?

Lane splitting or “white lining” is the practice of driving a motorcycle in between the lanes of traffic. Bikers often split the lanes when traffic is slow or at a stand-still. The ability to split lanes and bypass heavy traffic is one of the great advantages of riding a motorcycle in California. Although the practice is illegal in many states, California is not one of them.

California law explicitly acknowledges lane splitting and promotes the practice so long as the biker does it safely. Section 21658.1 of the California Vehicle Code defines lane splitting as “driving a motorcycle, as defined in Section 400, that has two wheels in contact with the ground, between rows of stopped or moving vehicles in the same lane, including on both divided and undivided streets, roads, or highways.”

Section 21658.1 further authorizes the Department of California Highway Patrol to develop educational guidelines relating to lane splitting, and the Department indeed has done just that. California Highway Patrol guidance makes it clear that “[l]ane splitting by motorcyclists is legal,” and that if other vehicle drivers “intentionally block[] or imped[e] a motorcyclist in a way that could cause harm,” including by “[o]pening a vehicle door to impede a motorcyclist,” the driver’s conduct “is illegal.”

Nothing about CVC 22107 renders lane splitting unlawful, but it does serve to emphasize the need to ride safely, whether changing lanes, turning, or splitting lanes. CVC 22107 applies to all vehicles, and it applies whenever a motorist “move[s] left or right”; the section does not specifically refer to changing lanes. Bikers, like drivers, must signal appropriately, check their mirror and blind spots, and be aware and alert of their surroundings before moving left or right–whether to change lanes, turn, or lane split.

If you have been injured in a motorcycle crash or if your rights as a motorcycle rider have been infringed in San Francisco, contact William E. Weiss for a free consultation at 415-362-6765 ext. 157 or preferably my cell at 415-235-7060. You can email me at william.weiss@gmail.com.