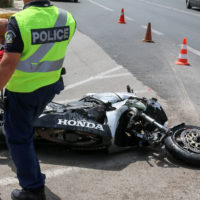 Two longtime motorcyclists were recently killed in a collision with an SUV. The accident occurred at an intersection which residents had repeatedly described as dangerous and in need of restructuring, and serves as an example of the ways in which intersection and roadway design can contribute to serious traffic accidents.

The accident occurred at 4:15 in the afternoon, in full daylight, at the corner of Columbia Avenue and Kearney Street in the Northside neighborhood of Riverside. An SUV was traveling west on Columbia Avenue and had stopped to turn left onto Kearney Street, waiting for the flow of traffic to abate. The accident victims were a married couple in their 50s, both riding a single bike and also traveling west on Columbia. As the SUV driver began to turn left onto Kearney, the motorcycle crossed into the eastbound lanes, striking the front-left section of the SUV. The motorcyclists were thrown from their bike and had died before paramedics arrived.

A young woman who identified herself as the niece of the fatally-injured riders said that they had been longtime members of a local motorcycle club and regularly rode their bikes. “It’s just something they loved doing, was riding their motorcycles,” she said.” Others who gathered at the accident scene noted that this intersection had previously been the site of other serious accidents, and described their frustration that nothing had been done to improve its safety. One resident of Kearney Street offered, “the whole neighborhood has been fighting to get a light down there on that corner.”

Negligent roadway design can present a serious hazard to drivers of motorcycles in particular, since bikers’ safety is even more dependent on ideal road conditions than it is for passenger vehicle drivers. Civil engineers and government contractors have a duty to follow reasonable industry standards in designing roads and intersections by, among other things, installing necessary stop signs or traffic signals, as well as implementing appropriate speed limits and warning signs. If those engineers or contractors fail to design a safe intersection following widely-acknowledged safety standards, and those flawed roadway designs cause injury to drivers, they can be held legally responsible for the costs associated with those injuries. Speak with an experienced motorcycle accident attorney if you believe your accident stemmed in part from poor design of the intersection or road where your crash occurred.

If you’ve been injured in a motorcycle crash in the Bay Area, contact the seasoned, knowledgeable, and trial-ready San Francisco motorcycle rights lawyer William E. Weiss for a consultation, at 415-362-6765.