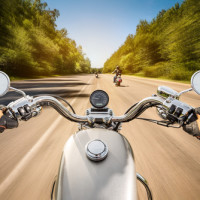 In a legislative climate that so often targets motorcyclists as the enemy on the road, recent changes to federal law include modifications that should protect both motorcyclist safety and legal rights.

The changes, approved by Congress on December 3, are included in the Fixing America’s Surface Transportation (FAST) Act, a five-year, $305 billion transportation bill. Most significantly for biker rights, federal funds may no longer be used by local police forces for discriminatory motorcycle-only checkpoints. The ban is the result of a battle lasting nearly a decade, waged by motorcyclist advocacy organizations against the unfair practice. While states may continue to use checkpoints which target only motorcyclists, the federal highway system will no longer fund such checkpoints. Advocacy groups such as the American Motorcyclist Association have stated that they are glad that the federal government has realized that the programs were both ineffective at promoting safety in addition to being unfair, and their attention will now shift to lobbying state legislatures to eliminate the process, as well. Motorcycle-only checkpoints are already illegal in a number of states, including California.

Additionally, several measures in the bill should lead to safety improvements for motorcyclists in particular. The bill will reestablish the Motorcyclist Advisory Council, which will advise the Department of Transportation on improvements that must be made to US infrastructure to promote motorcyclist safety. The bill also funds highway safety grants aimed at reducing distracted driving, which is particularly dangerous to motorcyclists but can be lethal to all drivers. The FAST Act will also establish a dedicated fund aimed at supporting the Recreational Trails Program. This program offers funds to states in support of the maintenance, expansion, and improvement of opportunities for off-road recreation. The program had been intermittently defunded, but will now have more consistent financial support.

If you feel that you’ve faced unfair targeting by law enforcement as a result of being a motorcyclist, or if you have been injured in a crash that resulted from negligence on behalf of another driver, contact seasoned Bay Area motorcycle accident attorney William Weiss for a consultation on your claims, at 415-362-6765.