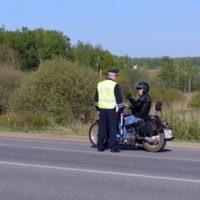 Any longtime member of a motorcycle club probably has their suspicions regarding whether police unfairly target riders wearing three-piece club patches. Many riders have experienced blatant biker profiling again and again. A recently-released video from the Motorcycle Profiling Project gives greater credence to claims of profiling, and even indicates that local police may be working at the request of federal agencies to investigate club activity at the local level.

The Motorcycle Profiling Project, a motorcycle rights advocacy group, received the video from one of the victims of a Ft. Worth, Texas traffic stop that seemed to have the sole purpose of documenting personal and photographic evidence on the group of bikers involved. In the video, one of the bikers describes the group as being “good guys.” One of the officers responded, “Unfortunately, for you all at least, the FBI leaves it upon us to take pictures and make contact with everyone associated with. And even though y’all don’t claim 1%, y’all associate with 1%’ers. So, we kinda gotta stop y’all every once in a while too, you know what I mean?” It is not clear from this video whether these practices by the FBI are widespread across the country, or targeted only at the activities of certain clubs and those associated with club members. Even if this is unique to certain geographic areas, collusion between local police and the FBI is troubling.

Some motorcycle rights experts have been decrying this sort of illegal profiling for years. Motorcycle rights advocate Dr. Will Dulaney is often called as an expert witness in motorcycle gang trials, and he has gathered evidence of federal profiling conducted through local law enforcement from all over the country. He stated, “The model is simple: specific federal agents use various federal, state, and local police ‘motorcycle gang’ task forces to profile members and friends of motorcycle clubs. The profiling ranges from pre-textual traffic stops intended to document identities and update gang crime databases to the systematic deprivation of civil rights; with violations of the 1st, 4th, and 14th Amendments being most prevalent.”