Can I Sue the Government for a Motorcycle Accident Caused by a Dangerous Road? 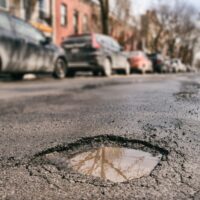 Traffic accidents can happen for a variety of reasons. A distracted or intoxicated driver can make a reckless move, poor weather conditions can leave ice, snow, water, or other hazards on the road, or any number of other factors can come into play. Occasionally, however, a crash occurs because the government agency that designed a road or intersection left it in such a dangerous condition so as to make it more likely for a serious accident to occur. Motorcycle riders are especially susceptible to injury from defective roads. If you crashed while riding your motorcycle because of the failure of a state or local government to keep the roads safe, can you sue the government? Continue reading to learn about lawsuits against the government after a motorcycle crash, and call a zealous San Francisco motorcycle accident attorney if you’ve been in a bike crash in the Bay Area.

In the U.S., the principle of “sovereign immunity” dictates that the government can only be sued if there is a law specifically authorizing the lawsuit under the given circumstances. Pursuant to the California Tort Claims Act (CTCA), motorcycle accident victims are permitted to sue state or local government agencies when the actions of those agencies in designing, maintaining, or failing to maintain California roadways were the proximate cause of the accident.

According to Cal. Government Code § 830.2 there is no cause of action if the defect is trivial:

A condition is not a dangerous condition within the meaning of this chapter if the trial or appellate court, viewing the evidence most favorably to the plaintiff, determines as a matter of law that the risk created by the condition was of such a minor, trivial or insignificant nature in view of the surrounding circumstances that no reasonable person would conclude that the condition created a substantial risk of injury when such property or adjacent property was used with due care in a manner in which it was reasonably foreseeable that it would be used.”
One of the most difficult cases against the public entity is where you claim a design defect is the cause of the injury. According to Cal. Government Code § 830.6 a public entity is not liable for design defect if: “Neither a public entity nor a public employee is liable under this chapter for an injury caused by the plan or design of a construction of, or an improvement to, public property where such plan or design has been approved in advance of the construction or improvement by the legislative body of the public entity or by some other body or employee exercising discretionary authority to give such approval or where such plan or design is prepared in conformity with standards previously so approved, if the trial or appellate court determines that there is any substantial evidence upon the basis of which (a) a reasonable public employee could have adopted the plan or design or the standards therefor or (b) a reasonable legislative body or other body or employee could have approved the plan or design or the standards therefor. Notwithstanding notice that constructed or improved public property may no longer be in conformity with a plan or design or a standard which reasonably could be approved by the legislative body or other body or employee, the immunity provided by this section shall continue for a reasonable period of time sufficient to permit the public entity to obtain funds for and carry out remedial work necessary to allow such public property to be in conformity with a plan or design approved by the legislative body of the public entity or other body or employee, or with a plan or design in conformity with a standard previously approved by such legislative body or other body or employee. In the event that the public entity is unable to remedy such public property because of practical impossibility or lack of sufficient funds, the immunity provided by this section shall remain so long as such public entity shall reasonably attempt to provide adequate warnings of the existence of the condition not conforming to the approved plan or design or to the approved standard. However, where a person fails to heed such warning or occupies public property despite such warning, such failure or occupation shall not in itself constitute an assumption of the risk of the danger indicated by the warning.
Two examples of roadway defects that could give rise to liability include large potholes and debris on the highway created by a public entity. There are others, but these two seem to be the top two categories in my experience.

Proving a claim against the government can be complicated and often requires testimony from experts such as civil engineers. Additionally, different rules apply to lawsuits against the government. For example, injured victims must file their CTCA claims with the government agency within six months of the accident before they can file a suit in court. Contact me to discuss a potential claim. William Weiss has handled many such cases where defects caused severe injuries and death.

If you’ve been injured while riding a motorcycle, get help collecting the damages you are owed
by contacting the effective and dedicated Bay Area motorcycle accident lawyer William E.
Weiss for a free consultation at 415-362-6765ext 157, 1-800-MC-CRASH or by email at william.weiss@gmail.com