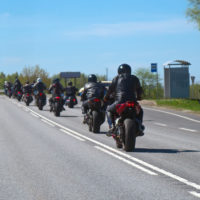 The Minnesota law, which was passed in 2012 and finally went into effect August 3, allows motorcyclists travelling in group rides of 20 or more to get off their bikes and direct traffic at intersections throughout the state of Minnesota. Those acting as road guards must first complete a three-hour, $30 course in directing traffic and use a stop or slow sign to direct the traffic. Road guards must also pass a background check of their driving record, showing they have no more than two petty misdemeanor moving violations over the previous two years, no impaired driving violations over the past five years, and that they meet certain vision, hearing and speaking requirements. Once certified, a road guard has the same power to direct traffic in Minnesota as would a police officer, and failure to follow the directions of a motorcyclist road guard can result in a misdemeanor.

Illinois passed a similar law to Minnesota’s road guard law in 2014. Legislation was also introduced into the Ohio legislature in 2014 to allow for road guards, and there have also been efforts in Wisconsin and Washington state regarding road guard bills.

No Protection for Motorcyclists to Direct Traffic In California

Motorcyclists in California and other states in practice sometimes do what the Minnesota laws allow for by getting off their bikes to promote safe passage of their group through busy intersections, but California state law does not allow for this, and a person other than a police officer who is directing traffic may be found to be in violation of the law. Some localities in California have allowed for motorcyclists who accompany funeral processions to get off their motorcycles and stop traffic at intersections to allow for the procession to pass, despite not having a permit to do so, but this is not a state-wide law and is not the law in San Francisco.

It will be interesting to see if the Minnesota law results in increased motorcyclist and motor safety, and whether pushes for similar laws allowing for motorcyclists to direct traffic will take hold across the country, including in California.

If you are a biker in need of legal advice from a lawyer who believes in motorcyclist rights, contact biker attorney William E. Weiss for a consultation at 415-362-6765.