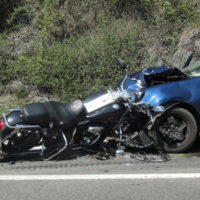 Motorcycle crash data from 2015, as reported last year by the Governors’ Highway Safety Association, showed a ten percent increase over the previous year in motorcycle fatalities nationwide. However, data from the same period showed that motorcycle deaths actually went down in California by seven percent. This is good news for California riders, but keep in mind that comparing statistics from year to year can be misleading, and motorcycle accident statistics over time have not been entirely predictable in California. For instance, the state saw a 23% increase in motorcycle crashes from 2003 to 2012, according to the Statewide Integrated Traffic Records System, but within this time period motorcycle accidents reached a high point in 2008, dropped 16% in 2009 and 2010, and then jumped back up again in 2011 and 2012.

One reason given for the 2015 increase in motorcycle traffic deaths nationwide was a relatively short, warm winter that provided more good riding days for the year overall. Also, lower fuel prices and a stronger economy meant more people were out on the roads driving more miles, both for employment as well as pleasure. Given the winter we are currently experiencing, these wet, stormy months may keep riders off the road except when absolutely necessary, but for those for whom a motorcycle is their primary means of transportation and who do not have a choice about riding, this season’s inclement weather can prove especially treacherous.

We know you ride as safely as you can despite the weather and traffic around you, but you can’t always protect yourself from careless, distracted or aggressive drivers. If you have been injured in a motorcycle accident in San Francisco, call attorney William E. Weiss at 415-362-6765 for a free consultation regarding your potential claims against a negligent driver or other responsible party.