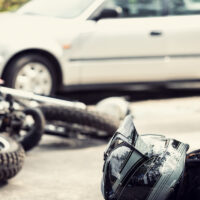 A motorcyclist recently suffered fatal injuries in a collision on a Bay Area highway. The man was struck while splitting lanes. Learn more about the crash and motorcycle lane-splitting accidents below, and contact an experienced motorcycle accident attorney for help after a crash in the Bay Area.

The recent crash happened on Wednesday, October 23, 2019, at around 4:15 pm. A 31-year-old man was riding his bike on Highway 880, heading south just before Fifth Street when the accident occurred. The man was riding between the lanes when a silver Mercedes Benz driving alongside him veered left and hit the man on the motorcycle. The motorcyclist was ejected from his bike and hit the ground. He was taken to Highland Hospital, where he ultimately succumbed to his injuries. California Highway Patrol is still investigating the accident.

In an earlier post on our blog, we explained that California was the first state to officially legalize lane-splitting. Since then, other states have joined California in sanctioning the practice. While lane-splitting has a negative reputation among many passenger vehicle drivers, it can, in fact, be a life-saving driving strategy for motorcyclists. Lane-splitting can help motorcyclists avoid being rear-ended while stopped in traffic or at a signal light if the driver traveling behind them is not paying attention to traffic. Researchers at the University of California, Berkeley, released a study showing that motorcyclists who split lanes were less likely to die in a crash or suffer injuries to the head or torso. Even the National Highway Traffic Safety Administration has cited research in support of the fact that lane-splitting can reduce the crash frequency for motorcyclists, as compared with motorcyclists remaining in the lane of traffic and traveling at the same speed as the cars around them.

Drivers of passenger vehicles have an obligation to check their blind spots and look for motorcycles or bicycles before changing lanes or turning, and California drivers should be especially thoughtful of the fact that a motorcycle might be splitting lanes since the practice is legal. While lane-splitting can save lives, riders should know that, if they choose to travel at a much faster speed than the cars around them, they experience a greater risk of being involved in a crash. That said, even if a motorcycle was traveling slightly too fast for conditions, they might still have a right to compensation from a driver who failed to check before making a turn or lane change and thus injured the driver.

If you’re a Bay Area motorcycle rider who was injured in a crash, find out if you have a right to money damages from the other driver by contacting the experienced and aggressive San Francisco motorcycle rights lawyer William E. Weiss for a free consultation at 415-362-6765.