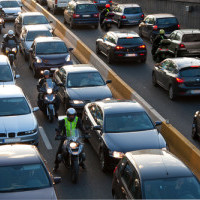 Controversy over the legality of “lane splitting” – the practice of motorcyclists operating their vehicles between lanes of stalled traffic – has revved up due to the California Highway Patrol’s decision to remove the lane splitting guidelines from its official website. Motorcycle enthusiasts and proponents of lane splitting claim that, in removing the guidelines, the CHP has only served to cause more confusion among motorists regarding the legality of the practice. Currently, California is the only state which permits motorcycle operators to engage in lane splitting, as long as they do so in a safe and cautious manner.

As a result of this confusion among both motor vehicle operators and law enforcement, a new bill has been introduced which would require the Commission on Peace Officer Standards and Training to ensure that the profiling of motorcycle riders is addressed in the course of basic law enforcement training and offered to law enforcement officers in conjunction with existing training regarding profiling.  Currently, riders say that the police are engaging in “motorcycle profiling” and that they are unfairly targeted. Ken Cooley (D-Rancho Cordova), who introduced AB 334, states that, “If there’s no evidence of wrongdoing, why stop them and subject them to a roadside stop?”

Opponents of lane splitting have argued that its potentially dangerous effects haven’t been adequately studied in the United States. However, a 2014 report released by the University of California, Berkley, has preliminarily shown that allowing lane splitting may, in fact, be safer than banning the practice.

According to the study, lane splitting caused riders to be less likely to be rear-ended by other motorists, thus reducing collisions overall. Furthermore, those motorcyclists who were involved in lane splitting accidents were injured far less seriously than other motorcyclists. Says California Office of Traffic Safety spokesman Chris Cochran, “What we learn is, if you lane-split in a safe or prudent manner, it is no more dangerous than motorcycling in any other circumstance.”

Lane Splitting Poised to Spread to Other States?

Other states, including most prominently Washington and Texas, have begun to propose their own laws to legalize motorcycle lane splitting after carefully observing California’s experiment. Oregon and Tennessee have recently entered into the arena as well, citing California as a model for the practice.

While it remains to be seen if motorcycle lane splitting will catch on nationwide, lane splitting remains the firm prerogative of motorcyclists in California, and if you or someone you know has been accosted by law enforcement for engaging in the practice, attorney William E. Weiss can help. Call us at 415-362-6765 to schedule a free consultation now.