I Didn’t Know That 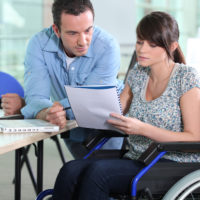 Many times you may do or say something to an individual with a disability that you may or may not know can be irritating or just downright rude. In this article I hope to explain some of these actions and exactly why they can be off-putting.

You see someone in a wheelchair and immediately think, “They must have more disabilities than mobility.”  Yes they might, but don’t assume and react like the person needs to be talked to and treated like a preschooler.

You meet an individual who cannot see. Why do you start talking louder?

You see someone who parks their car in a handicapped parking spot.  They don’t seem to have much of a disability.  Perhaps they have a heart condition or other medical problem where they cannot stand very long or cannot walk that far. One of the legs in their trousers may be prosthetic.  Don’t make some comment about always getting the good parking and wishing you could use the spot. If you had been through what that individual has survived you might suddenly realize you didn’t want to make that wish.

Someone has a beautiful golden retriever, labrador, poodle, potbellied pig, mini horse or other service animal.  Your first inclination might be to pet the animal or ask about the breed or why they need an animal or why they chose that animal.  Remember, the animal is working. It can be the person’s lifeline.  Keeping them out of traffic, retrieving things, turning lights on or off, or even sensing when the person is about to have a seizure and warning them. A service animal is medical equipment to a person with a disability, like a wheelchair or crutches.  When you speak you should address the owner and not the animal. The animal does get time off. Service dogs usually have time to “be a dog” and play.  Always ask the owner what you are allowed to do.

You meet a stroke survivor and they are moving around and talking to people so you assume they are “better.” While many individuals have such a severe stroke they never “come back” they should still be spoken to and not around. One great mistake is thinking because the survivor has garbled speech they are an idiot.  Nothing could be further from the truth. In many cases the individual might have Aphasia, a disorder that may cause an impairment of language, affecting the production or comprehension of speech and the ability to read or write. It may affect mainly a single aspect of language use, such as the ability to retrieve the names of objects, or the ability to put words together into sentences, or the ability to read. More commonly, however, multiple aspects of communication are impaired, while some channels remain accessible for a limited exchange of information. Many people with this particular disorder are trapped in their bodies.  Aphasia is a loss of speech, not a loss of intellect. They may want to tell you something but are unable.  How frustrated would you be?

Can a person with a disability live a full life?  Of course they can. Many times it’s the other person who can’t understand how it’s done. I know in stroke survivors with whom I have worked I will tell them, “sometimes pig-headedness is a good thing.” It’s a matter of wanting it. People with a disability don’t want to hear that they are such an inspiration. They are just trying to live their lives for them, not for others.  Watch the athletes in the Paralympics.  Consider Stephen Hawking, one of the greatest physicists of our era. He suffers from amyotrophic lateral sclerosis (ALS, Lou Gehrig disease.)ALS is a progressive neurodegenerative disease that affects nerve cells in the brain and the spinal cord.

How do you act?  Here are a few suggestions:

If you want to boil it down to one simple word it would be respect.

Darryl Weiss is a survivor of two brain surgeries for aneurysms, five major seizures, and five strokes (the most recent in May 2016) since 2005. He has a mobility disability and other residual issues from brain injury.

Prior to his health problems he was the General Counsel and Board Secretary for Telgian in San Diego.  He is a recent retiree from the US Wheelchair Fencing Team.  Now volunteers with the Brain Injury Foundation and writes articles on disability.