What Are the Dangers of Riding a Motorcycle at Night? 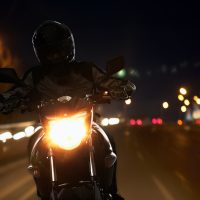 Decreased Visibility for the Biker

At night, visibility is worse. It’s a fact–without the sun, the road is harder to see, hazards on the road are harder to detect, and other motorists, cyclists, and bikers might not be as noticeable for a longer period of time. Even with streetlights and headlights, it’s harder to see at night. Many people will actually be distracted by headlights and streetlights, which can create a glare or a blinding effect.

For bikers, that decreased visibility means less time to react to road hazards and a greater chance of hitting something that will cause the bike to lose stability. Potholes, patches of water or ice, felled trees, and even pedestrians may dot the roads, and a biker might not be able to detect them until it’s too late. Be extra cautious while riding at night and make sure your lights are working to mitigate the added risks.

Perhaps more of an issue for motorcycle riders, riding at night reduces visibility for drivers of cars and trucks. Motorcycles are already more difficult to see when riding next to cars, often hiding in blind spots. Inattentive drivers might not even realize there is a motorcycle around. The problem is compounded at night when visibility is even more limited.

When riding at night, it’s important to wear reflective gear, keep your lights on, and ensure that all of your reflective equipment is in good working order. Do not let an unaware driver ruin your life by making a sudden turn or lane change without realizing you are there.

Drunk driving has and continues to be a serious problem on roads in California and across the country. According to the National Highway Traffic Safety Administration (NHTSA), every day in the United States, around 32 people are killed in drunk driving accidents. In 2020, 11,654 people died in alcohol-impaired traffic deaths.

Drowsy driving can be just as dangerous as drunk driving. Drivers who have been on the road for a long time, or who have simply been awake for too long, are likely to nod off behind the wheel. They’ll experience slowed reaction times and poorer judgment. Drowsy drivers are much less likely to notice and react appropriately to motorcycle riders nearby. For obvious reasons, drowsy driving is much more common at night, especially in the late hours of the early morning.

Motorcycle riders will also be less alert if they’ve been awake for an extended period, sapping them of the quick reflexes that may be necessary to prevent a crash. Bikers who feel themselves drifting should pull over to a safe location and recoup before getting back on the road. If possible, avoid long rides late at night to limit the risks of drowsy night riding.

If you have been injured in a motorcycle crash or if your rights as a motorcycle rider have been infringed in San Francisco, contact William E. Weiss for a free consultation at 415-362-6765 ext. 157 or preferably my cell at 415-235-7060. You can email me at william.weiss@gmail.com.