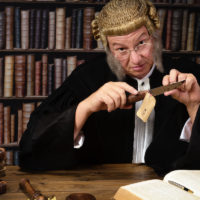 Blades that the County of Alameda considers to be “dangerous weapons” include: any knife with a blade that’s three inches or longer; any snap-blade or spring-blade knife regardless of the length of the blade, any ice pick or similar stabbing tool; any cutting, stabbing or bludgeoning weapon or device capable of inflicting grievous bodily harm; any dirk or dagger or bludgeon or blackjack; and any straight edge razor or any razor blade fitted to a handle. See § 9-12.050.

Like most California jurisdictions, the County of Alameda makes an exception to their additional restrictions on “dangerous weapons” when these are possessed, used or controlled by a minor for purposes of lawful employment or lawful recreation.  See § 9-12.070.  Since all of Alameda County’s restrictions are related to minors’ use or possession of weapons, and adults’ unlawful enabling of that use, it logically also has an exemption for minors’ permissive use. So, in unincorporated Alameda County, the selling, giving, loaning, or furnishing a dangerous weapon to any minor is permitted with the written consent of the minor’s parent or guardian, and a minor may use, possess or control a dangerous weapon with the consent of the parent or guardian under the direct supervision and control of some adult person.  See § 9-12.070.

However, if a minor possesses or controls a dangerous weapon while engaging in a fight or participating in any rough or disorderly conduct, then the permission exception does not apply, and he can be charged for unlawful possession in addition to the disorderly conduct rap.  See § 9-12.080

Fremont bans the possession, control, sale, use, gift, loan or furnishing to anyone and by anyone of a “dangerous weapon.” See Fremont Municipal Code § 9-15.050.

In Fremont, a “dangerous weapon” is any knife with a blade that’s two inches or longer (whether carried openly or concealed), all switch-blades and snap-blades regardless of length, any icepick or stabbing tool, any straight-edged razor or razor blade fitted to a handle, and any cutting, stabbing or bludgeoning weapon or device capable of inflicting bodily harm.  See FMC § 9-15.060

Fremont, like almost all California jurisdictions, also has an exception to dangerous weapon possession for purposes of lawful employment or recreation, and specifically exempts hunting knives carried in a sheath outside of the clothing while such person is engaged in lawful sport in which the use of such a knife is appropriate or going to or from such lawful sport, along with the possession or use of otherwise prohibited knives used in connection with bona fide organized and supervised youth activities, and the possession or use of any such instrument in lawful domestic or commercial pursuits. See § 9-15.060.

Fremont also carves out an exception for use of any of the above weapons to defend life or property, and to lawfully protect life, property, or crops from destruction or damage by any predatory or destructive bird or animal. See § 9-15.090.  That said, even in the self-defense situation, you’d still be on the hook for state law violations if there were any. For instance, if you use a 3″ switch-blade to stick someone who had crept into your home, according to this section, you’d not face city charges for use of the prohibited blade, but that doesn’t mean you couldn’t face state possession charges under California Penal Code sections 17235 and 21510.

Pleasanton has no additional knife laws, so only the default state laws apply.

In Livermore, it is unlawful for any person to wear or carry concealed about his person any dirk (see state laws for definition), Bowie knife, metal knuckles, or other dangerous or deadly weapon, without first obtaining a written permit to do so from the Chief of Police. See Livermore Municipal Code § 9-76.010.  This means that to carry such weapons, you must obtain a permit from the city, not the Chief directly.  The term “dangerous or deadly weapon” is not defined in the city code, so it will default to the state definition, which is “any weapon, instrument, or object that is capable of being used to inflict great bodily injury or death,” including pretty much every knife ever made. See People v. James, 88 Cal.App.3d 150 (1978).

The only knife ordinance that Union City has beyond the state laws is Union City Municipal Code chapter 12, section 28.270, under which any hatchet, axe, machete, brush knife or any other cutting device capable of harming a tree or plant (other than a pocket knife) is prohibited in public parks, plazas, promenades, playgrounds, and recreation areas without permission of the City’s Leisure Services Department. See § 12-28.270(A). While this sounds like they’re trying to prohibit vandals from wrecking the park, make no mistake that this is a knife control law. Utensils used in the preparation of meals, however, are excepted.  See § 12-28.270(B).

The only additional knife law in Newark follows Union City’s very closely, declaring it unlawful for any person to carry in any public park or recreation area any hatchet, axe, machete, brush knife or any other device other than pocket knife, capable of cutting, defacing or mutilating trees or shrubs, without the permission of duly authorized City representatives. See Newark Municipal Code § 12-16.260.  In this case, it’s the same as Union City: while this sounds like they’re trying to prohibit vandals from wrecking the park, make no mistake that this is a knife control law, and that you should mind what you bring into any park space.

Here are the baseline knife laws in California.

In California, folded pocket knives are legal, but it is illegal for any person to concealed carry any knife legally described as a “dirk” or “dagger” — the legal terms for any fixed-blade knife or stabbing weapon.  See § 12020(4). Even a locked pocket knife can count, so can a screwdriver in some cases. See § 16470.  BUT carrying a “dirk” or “dagger” in an openly-worn sheath hanging on your hip is not concealment within the meaning of the statute.  See § 12020(25)(d) and § 20200.

Switchblades and other spring-loaded knives are illegal in California if their blade is 2″ or longer. A switchblade is a knife with “the appearance of a pocketknife and includes a spring-blade knife, snap-blade knife, gravity knife, or any other similar type knife, the blade or blades of which are two or more inches in length and which can be released automatically by a flick of a button, pressure on the handle, flip of the wrist or other mechanical device, or is released by the weight of the blade or by any type of mechanism whatsoever.” See § 17235.  The statute expressly excludes pocket knives that can be opened with one hand by pushing the blade open with one’s thumb, as long as the knife “has a detent or other mechanism that provides resistance that must be overcome in opening the blade, or that biases the blade back toward its closed position.” See § 17235.  Basically, your regular pocket knife is legal, and switchblades are legal if they’re under 2″.

The law is zero tolerance on these, and they’ll bang you with a misdemeanor charge if you: (a) possess the knife in the passenger’s or driver’s area of any motor vehicle in any public place or place open to the public; (b) carry the knife upon the person; (c) sell, offer for sale, expose for sale, loan, transfer, or gives the knife to any other person. See § 21510.  The Court of Appeals held that possession of a switchblade in a person’s pocket, boot, etc., is unlawful, even if even if in one’s own home.  See People v. S.C. (2009).  Modifying a pocket knife into a switchblade-like knife makes it a switchblade.  See People v. Angel R. (2008).

Possessing a Knife in a Government Building – Penal Code § 171b

So that’s where we stand!