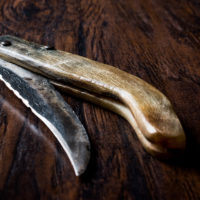 In addition to all of the state laws outlined below, Oakland has voted knife restrictions that are significantly more stringent than the state’s laws. In Oakland, all of the following are classified as a “dangerous weapon”: (1) any knife with a blade three inches or longer; (2) any snap-blade or spring-blade knife regardless of the length of the blade; (3) any ice pick or similar sharp stabbing tool; (4) any cutting, stabbing or bludgeoning weapon or device capable of inflicting grievous bodily harm; (5) any dirk, dagger or bludgeon (the state law section has definitions of these).  See Oakland Municipal Code § 9-36.010.

Regardless of state law, it is illegal in the city of Oakland to carry a “dangerous weapon” as defined above, whether open or concealed, or even to have one under your control (for instance, in your saddlebag or under the seat of your car). See OMC § 9-36.020.  As usual, there is an exception for knives you carry for purposes of a lawful occupation or lawful recreation. See § 9-36.020. All switchblades, including anything with a spring or snap mechanism of any sort, are illegal to possess, sell or use in any way whatsoever, ie. there’s no lawful exception for work or recreation.  See § 9-36.040.  If you’re in an Oakland city park, the only knife you’re allowed to carry without permission from the Parks Board is a pocket knife. See § 12-64.020.

If you get into a fight in Oakland or get into a “rough or disorderly conduct” situation (and that can cover a lot of things), and you’re carrying a blade classified as a “dangerous weapon,” you’ll be charged – at a minimum – with a separate disorderly conduct violation in addition to the knife charge.  See § 9-36.030.

All of the above described violations are classified as misdemeanors, punishable by up to 6 months in the slammer, a $1,000 fine, or both the time and the fine.

In addition to these, Oakland goes further than most other cities in California in their use of civil actions to combat people they view as criminals.  In 2004, the city government came up with a plan to fight gangs and crime by leveraging their legal control of the eviction process.  To wit, they came up with a plan to systematically take action to evict people who had broken laws and municipal ordinances.  This plan was codified in law as Oakland Municipal Code Chapter 8, section 23.100, the “Eviction for Nuisance and Illegal Activity Ordinance.”  Here’s what this ordinance is, how it works, and what it has to do with knife laws.

Municipal Code § 8-23.100 was created to expand the illegal activities that can be used to require landlords to bring eviction actions against individuals,  to penalize owners for allowing undesirable people and behavior on their property, to authorize the City to take other action against the rental property owner when he won’t act, to enable rental property owners to let the City itself take over the eviction action, to single out the specific person instead of everyone on the premises, and to create a quick and easy process to do all of the above. See § 8-23.100(A).

Under this ordinance, the category of “weapon” includes all “deadly weapons” as defined in California BPC § 7500.1(h), which lists slungshots, metal knuckles, dirks, daggers, and any knife with a blade longer than five inches.  See § 8-23.100(B).

In Oakland, by this ordinance, all leases between landlord and tenant automatically include a provision that prohibits all illegal activity on the premises, including illegal possession of a weapon as defined under above. See § 8-23.100(C). Under § 8-23.100(C) and § 8-23.100(D), any tenant who violates this prohibition or allows a violation is automatically subject to eviction under Oakland’s ‘Just Cause’ eviction section, § 8-22.360. Let me repeat that: if you violate this ordinance by possessing, say, a slungshot or a knife with a 5″ blade, in your own home or shop, you’re open to the eviction process outlined in the ordinance.

What this means for knife law is that in Oakland, it’s possible for you to be evicted from your rented home or business if you’re keeping illegal knives on the premises.  The case where this is most likely to occur would be in clubhouses, or places where people carrying illegal weapons are hanging out most often, but theoretically it could happen anywhere in the city that you rent from a landlord.  If you’re renting a place, and you’ve had cops take you or someone else away on a dangerous weapon charge for, say a slungshot or a long blade, take care that you don’t get a second offense that triggers action by the landlord and/or the City. In Oakland, there’s iron in the glove, they have a lot of power under § 8-23.100, and so far the courts have not found anything in the exercise of this power to be unconstitutional.

Here are the baseline knife laws in California.

In California, folded pocked knives are legal, but it is illegal for any person to concealed carry any knife legally described as a “dirk” or “dagger” — the legal terms for any fixed-blade knife or stabbing weapon.  See § 12020(4). Even a locked pocket knife can count, so can a screwdriver in some cases. See § 16470.  BUT carrying a “dirk” or “dagger” in an openly-worn sheath hanging on your hip is not concealment within the meaning of the statute.  See § 12020(25)(d) and § 20200.

Switchblades and other spring-loaded knives are illegal in California if their blade is 2″ or longer. A switchblade is a knife with “the appearance of a pocketknife and includes a spring-blade knife, snap-blade knife, gravity knife, or any other similar type knife, the blade or blades of which are two or more inches in length and which can be released automatically by a flick of a button, pressure on the handle, flip of the wrist or other mechanical device, or is released by the weight of the blade or by any type of mechanism whatsoever.” See § 17235.  The statute expressly excludes pocket knives that can be opened with one hand by pushing the blade open with one’s thumb, as long as the knife “has a detent or other mechanism that provides resistance that must be overcome in opening the blade, or that biases the blade back toward its closed position.”  See § 17235.  Basically, your regular pocket knife is legal, and switchblades are legal if they’re under 2″.

The law is zero tolerance on these, and they’ll bang you with a misdemeanor charge if you: (a) possess the knife in the passenger’s or driver’s area of any motor vehicle in any public place or place open to the public; (b) carry the knife upon the person; (c) sell, offer for sale, expose for sale, loan, transfer, or gives the knife to any other person. See § 21510.  The Court of Appeals held that possession of a switchblade in a person’s pocket, boot, etc., is unlawful, even if even if in one’s own home.  See People v. S.C. (2009).  Modifying a pocket knife into a switchblade-like knife makes it a switchblade.  See People v. Angel R. (2008).

Possessing a Knife in a Government Building – Penal Code § 171b

So that’s where we stand! Tune in next time to learn about knife laws in Alameda County.