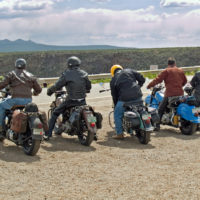 Rather than permit harassing conduct toward their community to continue unchecked, a coalition of motorcyclists in New Mexico has chosen instead to address the issue head-on by requesting a meeting with county sheriffs. Read on to learn more about the ways that motorcycle groups are standing up to the increase in police profiling, and contact a knowledgeable California motorcycle rights attorney if you’ve been the victim of harassing treatment by police in the Golden State.

A group of motorcyclists in Bernalillo County in New Mexico have noticed in recent months that sheriffs’ deputies have been pulling over motorcycle riders at a greater rate than before. The New Mexico Motorcycle Rights Organization (NMMRO) found that several of its members had experienced what they felt was unfair attention from police. In the past, the motorcycle riders of Bernalillo County had had an amicable relationship with police, making this profiling behavior seem like an even more troubling sign of a shift in department policy.

In speaking with local news media, the vice chair of the NMMRO, Raymond Gallegos, noted that “being profiled, it’s not a comfortable feeling.” He believed that sheriffs were seeing motorcycle club patches and colors on riders and presuming them to be criminals. One incident described to Gallegos by a local rider “was just a random stop,” Gallegos explained. “They pulled [the rider] over and really didn’t give him a reason other than the statement from the gang unit officer was ‘Well, you’re wearing gang colors.’”

This was one of three incidents that the NMMRO cited in a letter sent to the Bernalillo County Sheriff’s Department. The NMMRO explained that members of the riding community had experienced conduct at the hands of sheriffs’ deputies they felt to be harassing or intimidating, where motorcyclists who were wearing club vests or patches were being pulled over and “questioned about gang activity, harassed, photographed, recorded and intimidated.” The organization sought to meet with the Sheriff’s Department to discuss their concerns with what appeared to be a change in department policy, but a meeting was cancelled at the last minute. The motorcycle rights organization also described that it would be pursuing anti-profiling legislation and that a local member who had felt victimized by police harassment was seeking legal counsel based on the incident.

If you’ve been the victim of profiling based on your status as a motorcyclist in California, find out about your legal options by contacting the seasoned and aggressive Bay area motorcycle rights lawyer William Weiss for a free consultation at 415-362-6765.