Best and Worst Places to Ride 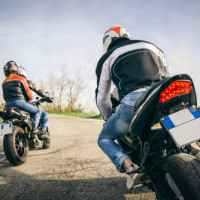 Summer is coming, which is prime motorcycle riding season. Perhaps you’re thinking about taking your bike out for a road trip. Maybe you’re looking for a more permanent change of scenery, and want to know more about whether or not a new spot is motorcycle-friendly before relocating. Fatality rates in motor vehicle accidents are an important factor to consider, as cities and states with a higher ratio of dangerous drivers can often leave motorcyclists even more vulnerable than passenger vehicle drivers. Below, you’ll find a list of some of the nation’s best places to ride a motorcycle, looking at factors such as road quality, rider safety, helmet laws, weather, and some of the best and most scenic rides.

Phoenix, Arizona: Phoenix is one of the cities that receives the least precipitation in the country, so you can expect warm, dry roads year-round. The state requires helmet use only for those under age 17, and has many scenic rides for motorcyclists, such as along the Apache Trail.

San Antonio, Texas: This city has a number of factors commending it as a good place for riders—warm weather, helmet laws only for riders under age 20, and some of the country’s lowest gas prices. San Antonio is also the beginning point of the so-called “Pickle Parkway,” a 41-mile stretch of road with an 85 mph speed limit, the highest posted speed limit in the U.S.

Chicago, Illinois: While the weather can get very cold and wet during the winter, Chicago is the home of the start of Route 66, America’s classic trans-continental highway and a road trip everyone should take once. Illinois is one of three states nationwide with no statewide helmet law.

Reno, Nevada: In a survey of best cities for drivers conducted by WalletHub, Reno has the nation’s best score for traffic and road conditions, which accounts for such factors as road conditions, commute time, days with precipitation, and annual hours of traffic delays. Reno is ranked as the 12th safest driving city by Allstate Insurance, making it less likely that you’ll get hurt while you’re on the road there.

The Badlands, North Dakota: North Dakota sees little traffic congestion and miles of open freeways with speed limits up to 80 mph. Only 7% of all motor vehicle fatalities in North Dakota were motorcyclists, the lowest percentage nationwide. Helmet laws govern only riders up to 17 years old and their passengers. Plus, the Badlands offer many scenic rides through some of the nation’s most beautiful scenery.

If you’ve been hurt while riding your motorcycle in California’s Bay Area, seek out legal counsel with personal experience and understanding of what the roads are like for bikers by contacting San Francisco personal injury attorney William Weiss for a free consultation on your claims, at 415-362-6765.