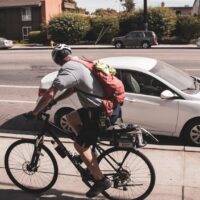 Berkeley, CA (August 21, 2020) – An automobile accident reported in Southwest Berkeley sent one victim to an area hospital for treatment of injuries. At approximately 5:30 p.m., on August 20, officers with the Berkeley Police Department responded to the scene of a motor vehicle accident on Channing Way.

Reports provided by authorities show that a rider on a dirt bike was traveling on Channing Way near the intersection with Ninth Street when they were struck by a vehicle. The rider sustained injuries to their lower extremities. Medical personnel rendered aid to the injured victim at the scene of the crash before transporting them to an area hospital for further treatment. At this time, the crash remains under investigation.

Our thoughts are with the victim injured in this accident.

Riding a bicycle is considered a relatively safe activity. Unfortunately, not every ride goes without problems. Thousands of people are injured in bicycle accidents each year in California. In Northern California, we see numerous victims left with broken bones, spinal cord injuries, and other traumatic injuries that require extensive medical treatment. In many cases, bicyclists sustain injuries stemming from car accidents caused by negligent drivers. When drivers are distracted by their phones, engaging in reckless behaviors, or even driving impaired, they place the lives of others at great risk. Although California is an exceptional place to live and work, it is considered to be the most dangerous state in the entire country for bicyclists. Our state has the highest number of bicycle fatalities in the country, coming in at around 750 each year, and a substantial number of injury accidents as well.

In many cases, bicyclists involved in auto accidents sustain life-threatening injuries in accidents that require immediate hospitalization and medical treatment. Many riders sustain broken bones, brain injuries, and debilitating spinal cord injuries that require both immediate and ongoing treatment. Not only are those harmed left to endure overwhelming pain and suffering, but they are often forced to spend tens of thousands of dollars on medical treatment as well. Although there are several treatment options available for bicycle accident victims, paying the exuberant costs can be extremely challenging, especially when victims are forced out of work to recover. When victims are injured in accidents caused by negligent and reckless drivers, it is crucial that they seek the legal guidance of a knowledgeable car accident attorney in California as soon as possible.

Victims injured in preventable accidents resulting from negligent and reckless drivers deserve justice and compensation for their traumatic experiences. Attorney Weiss at the Law Offices of William E. Weiss has over 30-years of experience helping victims throughout northern California move forward after being harmed in motor vehicle accidents. California personal injury attorney William E. Weiss provides competent and effective legal representation to ensure victims are able to move forward from their accidents in the best position imaginable. If you were injured in a collision as a result of a negligent driver, contact California accident lawyer William E. Weiss directly by calling (415) 235-7060 to explore the legal options available for you.

Notes:  Our firm uses outside sources when creating these posts.  These sources include but are not limited to various news sources, police reports, traffic incident reports, and first-hand accounts about accidents and the injuries involved.  For this reason, the details surrounding the accidents that we report about have not been independently verified by our writers and staff.  If there is any incorrect or false information in this post, please contact us immediately and will change the post to reflect the most accurate information available.

Disclaimers:  As valued members of our local community in San Francisco, we at William E. Weiss, are making an effort to improve the overall safety of our community members while informing them about the dangers of driving and reminding drivers to drive safely and use precautions. This post is not a solicitation for business.  The safety information provided should not be misconstrued as legal or medical advice. The photographs used in this post are not representative of the actual accident scene.